Friday, December 3, 2021
All Wiki Details
Home Information The Top 10 Foods You Have To Eat In New York City,...
Previous
Next

If you love eating and do you want to know the Top 10 Foods You Have To Eat In New York City? Then you can read the article. Here we are mentioning the list of top ten best food items you must eat in the New York City. These food items are famous and very tasty comparing with other food items which are available in New York.

New York is one of the greatest food cities in the world. Along with the Statue of Liberty, skyscrapers and yellow cabs, food is an important component of New York City. You can eat your favorite dishes in this place.

These cookies are looking half-white, half-black in color. And look like a sponge cake which is iced on one half with vanilla fondant and on the other half by chocolate fondant than a proper biscuit. It is created in Bavarian region of Germany. In the early 20th century, these biscuits were the result of left over cake butter, mixed with a touch of extra flour to hold their shape. These cookies are also called as half-moon cookies in Central New York. 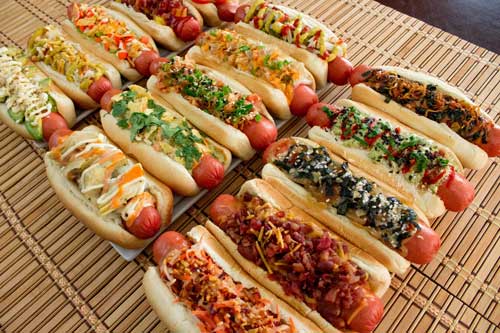 Hot dogs are traditionally made of ground pork, beef or both. These are flavored with garlic, mustard and nutmeg before being encased, cured, smoked and cooked. It is also known as a frankfurter or wiener which is a cooked sausage. It is steamed and served in a partially sliced bun. This type of sausage was culturally imported from Germany and popularized in the United States. The hot dog became ubiquitous throughout the US during the 20th century. The preparation process and condiments vary in the United States.

New York pizza boasts a thin crust topped with sweet marinara sauce flecked with heaps of oregano and mozzarella cheese. The pizza is originated in New York City in early 1900s. New York City’s streets are perfect spots for the people who want to eat pizza at any time either day time or night time. Now this pizza is available in New York Metropolitan areas and throughout the United States.

Fried chicken served atop breakfast waffles is a best combination dish. It is the American soul food tradition and uses fried chicken. This unusual combination of food is beloved by many people in New York. This dish appears firstly in Pennsylvania. It was a common Sunday dish among the Pennsylabania Dutch in 1860s. You can eat and enjoy this dish in the restaurants which are located in New York City.

A knish is an Eastern European snack food consisting of a filling covered with dough that is either grilled. In most the filling entirely of mashed potato, ground meat, onions, sauerkraut, kasha or cheese. Potato knishes with spicy brown mustard are a New York Classic, mushroom, spinach and other vegetables. Knishes are commonly sold at Jewish delis, diners, butcher shops and street vendors from Brooklyn to the Bronx. 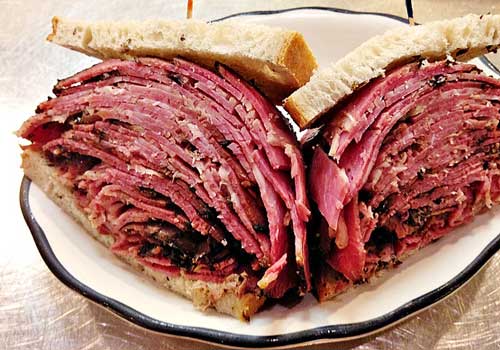 Pastrami on rye is a sandwich which made famous in the New York City by Jewish kosher delicatessens. It is cured in brine then seasoned with garlic, coriander and loads of black pepper. Pastrami was first created in 1888 by Sussman Volk and he served it on Delancey Street in New York City at first time. Enjoy this dish with a side of classic dill pickles for a perfect New York launch.

Cheesecake is a sweet dish consisting of one or more layers. The thickest layers of this food item consists of a mixture of soft, fresh cheese eggs and sugar and the bottom layer consists of a crust. Cheesecake can be prepared in many flavors such as pumpkin, key lime, strawberry, chocolate, Oreo etc. In 1950s, Junior’s has used this recipe for the three generations. Cheesecake is usually sweetened with sugar and may be flavored with fruit, nuts, whipped cream, cookies, fruit sauce or chocolate syrup. 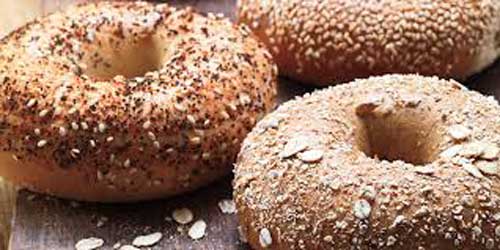 A bagel is a bread product originating in the Jewish communities of Poland. It is shaped into the form of a ring by hand from yeasted wheat dough and boiled for a short time in water and then backed. These bangels are topped with poppy, sunflower or sesame seeds. This dish brought to New York in the late 1800s by Eastern European Jewish Immigrants. Bangels are most popular bread product in North America, especially in cities with a large Jewish population.

General Tso’s chicken is a sweet and deep-fried chicken dish which is served in North American Chinese restaurants. It is made of chopped, dark meat chicken and coated in a sugary sweet, rich garlic hoisin sauce, speckled with hot chili peppers and sesame. It was introduced to New York during the 1970s Hunan craze in the city. General Tso’s epitomizes Chinese-American cuisine. The General Tso’s is best cookie baked in Brooklyn.

Spumoni is a molded Italian ice cream made which is made with layers of different colors and flavors. Usually these flavors containing fruits and nuts. The ice cream layers are mixed with whipped cream. Cherry, pistachio, chocolate or vanilla are the general flavors of the ice cream layers. It is very popular food item in places with large Italian immigrant populations such as United States and Argentina. Spumoni is one of the best dish which is also available in New York City.